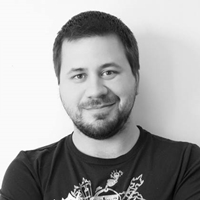 The labor way he suddenly began as a journalist in the newspaper "Delo" and as an observer in the "Lichniy Schet" and "Dengi.UA" magazines. He continued his way at the position of PR-manager in the investment company Dragon Capital and then at the position of press secretary of State administration of sea river transport in the Ministry of Infrastructure of Ukraine.

In 2013, he accepted position of digital-manager in "Novaya Liniya" chain. Since 2015, he transferred to "Epicentr K" chain to improve digital-communications.

All this time he was doing something and even remembered, what from this was good and what's not. He has no outstanding awards and titles, he loves his job. And foxes :)