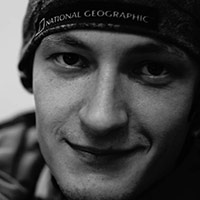 
In 2009 Stanislav graduated from Donetsk National Technical University with a major in "Electromechanical systems of automation and electric drive".

After university, he worked in NII "Avtomatgormash V.A. Antipova" where in 5 years he passed a way from the design engineer to the project chief designer. In university he was engaged in development and implementation of mining equipment management systems.

In parallel with the Institute work he did his own projects related to the electronics development.

Thanks to his interests he was entered in the first Ukrainian laboratory of personal digital manufacturing IZOLAB which opened in Donetsk in 2012 under the "Platform for Cultural Initiatives Isolation".

Since 2014 Stanislav became an administrator of the laboratory. After capture of "Iisolation", in June 2014, the laboratory with the fund was evacuated to Kiev. After restarting of updated IZOLAB, Stanislav together with Dmitro Biriukov, Jana Yukhimenko and Fedor Boytsov, founded the organization aDDDitive, whose mission is to support and technological ecosystem development of Ukraine.

Durring 2015, under aDDitive, more than 10 large projects that developing technological potential of Ukraine were implemented. Among them it is possible to mark out the conference on additive technologies (3D printing) aDDDitive meetUp, the expo-area Smart City at iForum 2015 and the mini-conference HardWareLab on Odessa Innovation Week. In parallel with the event organization, speaking engagement and travel to Ukraine and Europe, Dmitry and Stanislav have launched the production laboratory aDDDlab which helps entrepreneurs and developers to create prototypes and small series of products. From robots to cartoon characters.