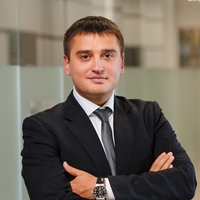 
In 2007, Bornyakov founded SoftTechnics that developed web, mobile apps, and games. After it was acquired by Intersog from Chicago, he occupied the position of managing partner.

In 2008, Alex co-founded VertaMedia headquartered in New York with a representative office in Odessa. Bornyakov is a co-founder and partner at Clickky, a mobile marketing platform that operates in customer attraction and mobile app monetization. They employ more than 60 people working at 4 offices in Europe and the USA.

Since June 2012, Alex is a co-founder and managing partner at the WannaBiz incubator. In 2015, he joined Odessa IT-Cluster, which mission is to unite the local government, business, and education to develop the regional IT industry, and the "My City" project set to make Odessa flourish.

Starting your own IT/digital business in the USA