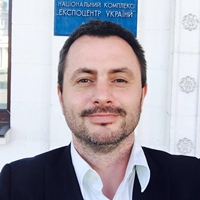 
Maxim "Icebreaker" Bahmatov - successful entrepreneur who has created from the ground up more than one business, both in Ukraine and abroad, former KVNschik, founder and active member of the Ukrainian Comedy Club. Currently he holds the position of Acting CEO of the National Expocenter of Ukraine.

In early 2000s he worked as Director of business development in Leo Burnett agency as well as sales manager in Samsung. In 2005 he was a co-founder of IT-company UkrGerman Enterprise (UGE).

At iForum-2016 participates in the panel "Formation of Ukrainian IT-clusters", "Startups" stream.