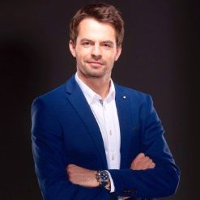 
Successful entrepreneur and the founder of Clickky, the global monetization platform for publishers. He launched Clickburner, his first digital marketing startup in 2010. Clickburner was a social app monetization ad network that later evolved into the Clickky platform, which now employs more than 80 people in 4 countries and was rated 11th in INC5000 fastest growing companies in Europe list.

In 2012 Vadim founded AdCenter - the first fully automated service for social ad campaign management in Eastern Europe. In 2013 it was sold to VertaMedia. Moreover, Vadim is a co-founder and the managing partner at WannaBiz, one of the leading startup incubators in Eastern Europe.

In 2015 Vadim was featured on the Ukrainian Forbes cover.

How to make B2B sales abroad, being in Ukraine