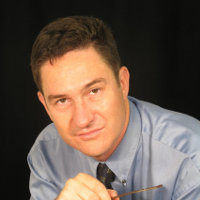 
Val Jerdes is Partner at Innov8 Global Ventures and Advisory, working out of their offices in California and Moscow, Russia. Val specializes in both growing startup companies and designing the ecosystems that nurture their success: A unique expertise at the intersection of private venture and public policy. Val is also Advisor at GrowthUp, Pulsar Ventures, Vertical Ventures, Director of the Kauffman Fellows Venture Capital Academy Executive program, a lecturer at Stanford University, Moscow State University, and Singularity University ­ and is a sought­after speaker and consultant in entrepreneurship and innovation.

He has structured, co-­founded or consulted for a number of venture capital funds, including Foresight Ventures, Reactor Ventures, Pulsar Ventures, and Sarov Technopark (a joint venture of AFK Systema Gals, RosNano and RosAtom). He has advised on the formation of numerous incubator and accelerators, and worked with regional and national governments in Russia, Chile, Ireland and the US. His primary focus has been Ukraine, Russia, and former CIS countries, where he has also worked in private equity and capital markets.

Swimming with the Big Fish: How Eastern European startups are entering Silicon Valley